Back to the blog

The Solheim Cup is a biennial golf tournament held between September 13 through 15 for professional female golfers. Held at the PGA Centenary Course at Gleneagles in Perthshire, Scotland, the course is home to three championship golf courses and a world-class venue.

This year’s tournament was contested by teams representing Europe and the United States. After a fantastic match over 3 days, Team Europe won for the first time since 2013.

The Gleneagles courses are overseen by Craig Haldane, who we first met while he was Director of Golf Course Maintenance at Emirates Golf Club in the United Arab Emirates. Craig was initially skeptical of the POGO system, but after an introduction through a third party, has  become one of POGO’s most vocal supporters.

Becoming a Believer in POGO

When he was first introduced to the POGO, Craig didn’t believe POGO was a useful tool or necessary in his operation in the Middle Eastern desert. Craig stated that he was able to manage to the high rate of evapotranspiration from the desert heat, and that gave him the information he needed to manage his course on a day-to-day basis.

We gave Craig a demo POGO Pro and asked him to try it for a month.

After 6 weeks, Craig was ready to give us his opinion. We reviewed the data he had collected, but before we could dive into the insight he was getting, he ordered 3 units and said, “For the first time I have skipped an irrigation event when I would have otherwise irrigated. I’m a believer that this is a priceless piece of my daily operation now.” 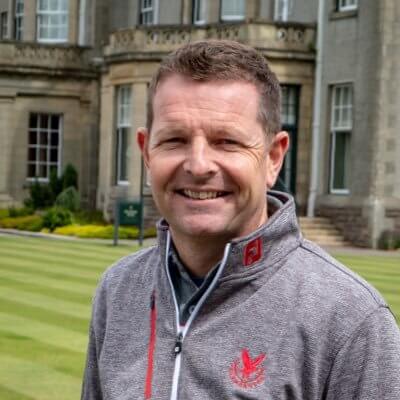 POGO’s Visual Insight was priceless in helping us determine key tournament management practices to achieve the conditions the ladies were seeking for the Solheim Cup. Having live access to critical information related to tournament conditioning in the palm of our hands allowed us to make informed decisions on the move. Simply invaluable!

It’s not unusual to get a lot of precipitation in the areas north of Edinburgh. In the fall, irrigation is not the concern—it’s keeping the greens from becoming overly saturated with moisture. Gleneagles employs a SubAir subsurface aeration and moisture control system to help combat the moisture in their greens.

Throughout the event, each green was sampled with multiple POGO Pro+ in the morning and the afternoon. By immediately uploading the data to TurfPro Cloud, staff members could make on-the-fly decisions using the course data received from the POGO. Visual Insight reports generated by the data showed moisture, ball speed, and firmness conditions on a satellite map of the course. These reports allowed the staff to determine the practices for the next day’s play.

With this data we learned that there was no direct relationship between moisture/dryness and actual ball speed. When we measured the roll during the morning when the greens had slightly more water, we found that the ball rolled faster. This was likely due to the ground compressing due to the extra moisture. As the ground dried, more friction was applied to the ball, slowing it down.

If staff were able to dry the greens down and get a good double cut and roll on the greens, they were able to maintain consistent speeds from green to green. We tracked this with Visual insight and saw the uniformity by the last day of the event. 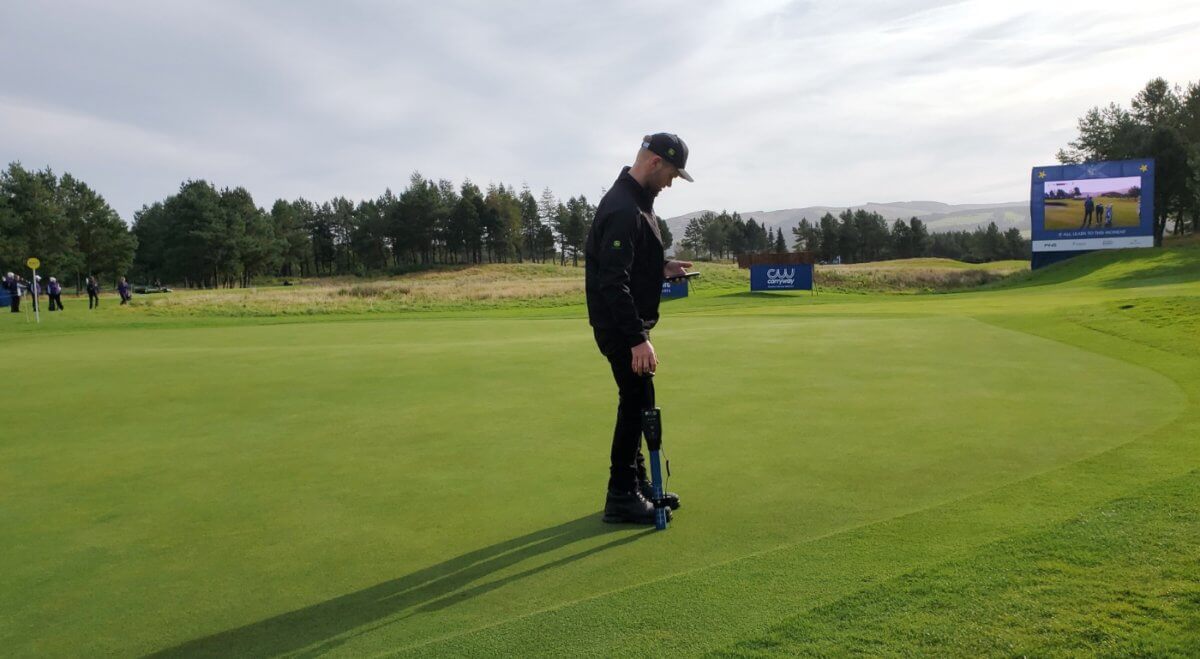 Rain fell on and off throughout the event, but with the SubAir systems in operation and POGO measurements in his pocket, 1st Assistant Greenkeeper “Stevie” Lindsay had the tools he needed to keep moisture levels in optimal range and consistent across every green. Four days before the tournament, when the period of frequent precipitation began, Stevie noticed something. The Visual Insight reports for moisture on three greens showed consistently high moisture across one of their greens. This was unexpected as the staff depended on the SubAir system to deliver a uniform dry down of the greens.

By highlighting the high moisture across the greens with the SubAir system, Visual Insight showed which green was affected by the SubAir failure. If it were not for the graphical reporting of Visual Insight, the staff may not have pinpointed the cause in time for the tournament.

One interesting lesson we saw was that SubAir’s impact on the greens was non-uniform, further showing the value of measuring often with POGO to make better decisions. Soil structure, organic matter composites and makeup, and the overall impact of other water holding features vary dramatically from green to green or zone to zone. 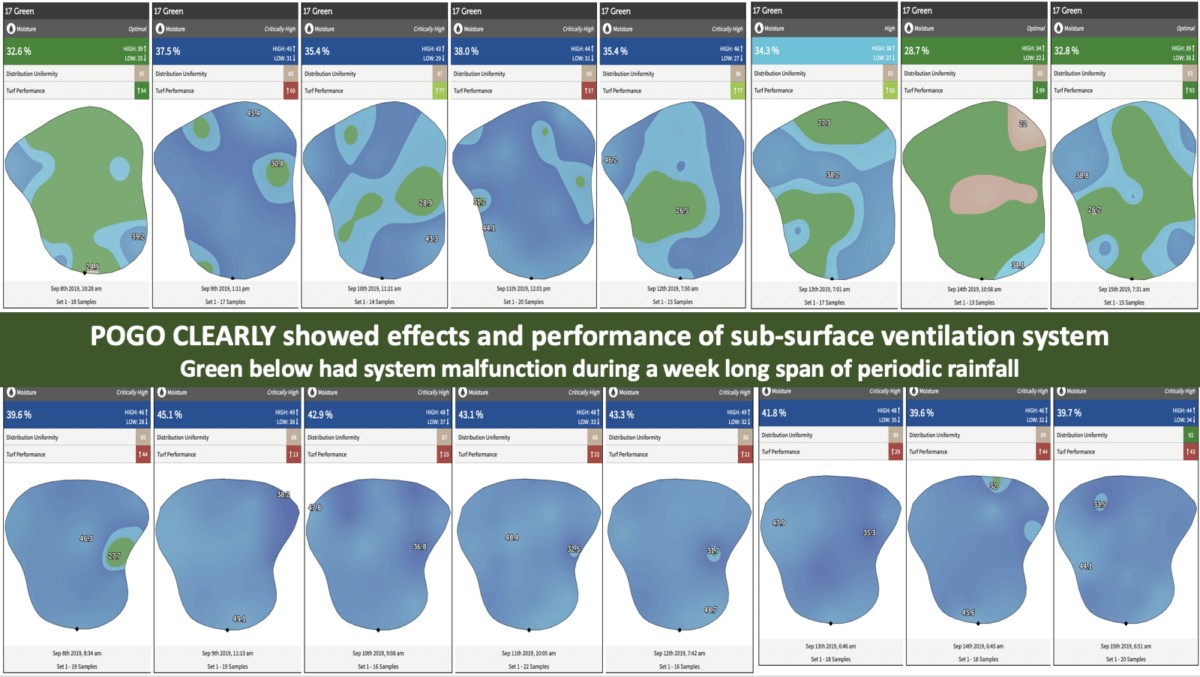 POGO showed us just how effective our use of the Sub-Air System was throughout the week. We had a control green which was not working and the difference was phenomenal! Seeing just how much we were able to dry down the greens through a challenging week gave us even more confidence in the decisions being made.

In the end the event was a tremendous success and the course was in such fantastic condition, “perfect” seems like an understatement. Craig and his team should be proud. As should the USA team who played a great game, losing by only one point. Congratulations to Team Europe!

PrevPreviousRegister for Exclusive Deals and Events at GIS 2020

Stevens Water Monitoring Systems, Inc. will use the information you provide on this form to be in touch with you and to provide updates and marketing.

You can change your mind at any time by clicking the unsubscribe link in the footer of any email you receive from us, or by contacting us at info@stevenswater.com. We will treat your information with respect. For more information about our privacy practices please see our privacy policy. By clicking below, you agree that we may process your information in accordance with these terms.

Thank you @Greentech_Ltd and Polyclean UK for your great support in the UK and Middle East! And to our team for all your efforts. We're just getting started! See everyone at @GCSAA booth 2153_

What an awesome trip! 4 countries in 12 days! I'm so dam proud of POGO's influence on our industry around the world. It's a 2 decade vision all coming to life. Thank you all for your support! Coming home to see my girls is always wonderful too! Philly looks GREAT! Go EAGLES!

What an awesome trip! 4 countries in 12 days! I'm so dam proud of POGO's influence on our industry around the world. It's a 2 decade vision all coming to life. Thank you all for your support! Coming home to see my girls is always wonderful too! Philly looks GREAT! Go EAGLES!

Newest rule coming out of Harrogate...the cup must rotate on a 0.3 meter radius continuously and change directions without notice.

Our POGO TurfPro Mobile app, now setting a new standard with on-the-fly gps correction, included for all TurfPro customers! Look for the app update on the stores during @GCSAA conference week!

We advanced our POGO GPS position precision with in-app on-the-fly correction features so you can exactly pinpoint what and where you are measuring. Also for sportsturf, greenhouses, indoor POGO applications and more! Check it out... https://youtu.be/nb_pfLkb4nM via @YouTube

What a phenomenal turnout this evening! Thank you for all your support, feedback and help leading us into the future. We can't do it without any of you, and we greatly appreciate your business and support!

We advanced our POGO GPS position precision with in-app on-the-fly correction features so you can exactly pinpoint what and where you are measuring. Also for sportsturf, greenhouses, indoor POGO applications and more! Check it out... via @YouTube

There is nothing better than catching up with friends who have taught me so much from their work. Gordan is one of the finest gentlemen I know. Thank you for all your insight my friend!

Anyone interested in attending our POGO event tomorrow (Tuesday) evening from 5 to 7 PM, come see us at Booth 514 in Hall 5 and we'll hook you up. Going to be a great time and we welcome all here at @BIGGALtd BTME!

Averaging 300+ course and field visits annually in 5+ dozen countries for years and reviewing conditions from 1,000's daily teaches a ton. It's not thatch + OM that kills you. It's the lack of fresh O2 stimulation needed daily! Learn more at @BIGGALtd Booth 514, @GCSAA Booth 2153

From Abu Dhabi to Manchester UK, gearing up for @BIGGALtd BTME. Definitely a weather shift from the Middle East! Learn everything POGO this week at Booth 514 with our rep @Greentech_Ltd. And if you didn't get your invitation to our POGO hospitality Tuesday night, message us here!

Well said! And nobody, except the staff, truly realizes the aftermath of these events, the recovery efforts, and the relentless passion we put into getting the whole property back to daily play conditions. It's a priceless operation and commitment that is very unique to turf.

@POGOTurfPro I think it a realistic and valid point. It’s rough getting there and exhausting during. Clubs shouldn’t be responsible as they sacrifice enough leading up to and after. Years of inconvenience and hard work.